The American Astronomical Society is a professional organization made up of the top astronomers in North America. Established in 1899, their mission is to “enhance and share humanity’s scientific understanding of the universe”.

Twice a year, AAS meets to discuss the latest in science, network with other members and present research from within their respective fields. In the past, these meetings were hosted in-person. However, 2020’s COVID-19 pandemic forced the team to shift the event online. In June 2020, the first AAS virtual meeting was hosted with vFairs.

When searching for the best way to execute their online meetings, a colleague suggested vFairs to the rest of the team. They had previously attended a vFairs event and noted that the platform had everything they were looking for.

Their meetings aimed to create a space where people could exchange information and ideas about science. Rita Braxton, Senior Meetings Manager at AAS, notes that “it’s all about the science.”

With in-person meetings, the team would choose venues that were easily accessible from both the east and west coasts. They looked for venues that featured good equipment and service to support all of their needs. The AAS virtual meeting also needed to be easily accessible and user-friendly, and have enough features to support all of their virtual event needs. 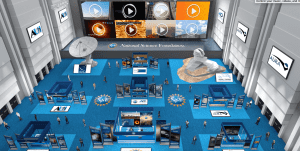 The first AAS virtual meeting was hosted with vFairs from June 1-3, 2020. The second event was hosted in January 2021. Registration was open primarily to members of the AAS, but non-members, students and affiliates from the private sector and government were able to attend as well. They wanted to ensure each group received value from this event, because their attendees were a mix of audiences.

They decided to host three separate exhibit halls: a general exhibit hall, a graduate fair hall and a hall dedicated to the National Science Foundation. Additionally, they featured a poster hall where students and researchers could showcase their research and discuss their findings with other attendees. They also integrated Slack into the event. This allowed attendees and researchers to more easily discuss and view previous conversations about said research. 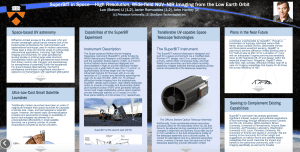 Additionally, the virtual auditorium hosted presentations by invited speakers and students. Sponsors also hosted live town halls and workshops in this virtual space. Presentations were only conducted live at previous in-person events. There was no way to access the presentation once it concluded. With vFairs, webinar presentations were published 24 hours after they concluded. This meant that attendees who had missed the live presentation could revisit and watch on their own time.

Rita noted that they actually saw increased attendance when hosting their first meeting online.  She noted that summer events were historically less well-attended than their winter counterparts, but this shifted with their first online event.

In the Spotlight: The Virtual Environment

One key aspect of the virtual event that made it stand out was the immersive and interactive virtual environment. Interactivity and engagement was key for the event to feel successful, and in general they felt the vFairs platform offered that kind of functionality.

“We wanted to have an interactive exhibit hall, that was very important to us,” says Rita. “We wanted it to feel as much like an in-person meeting as possible… to give them a more personal feel to let them know that we’re not in person but we can still enjoy this experience.”

In the future, the team would like to try to drive more activity to the interactive exhibit booths within the exhibition halls.

Additionally, features within the environment — such as the help desk — were extremely valuable to Rita. This was where she spent the most time interacting with attendees. She gathered important feedback about how their experience and how the event could be improved in the future.

Plans are already underway for AAS’s next virtual event with vFairs. Rita and her team are looking forward to working with the team again. Rita noted that their experience with the vFairs team “was really good! We requested to work with the same team again for our next meeting.”

Check out our Ultimate Guide to Virtual Conference