How can an educational organization highlight the value of their special programs to parents and students amidst a global pandemic? APS Engineering the Future did just that with their spring showcase with vFairs.

What is APS Engineering The Future?

The Albuquerque Public School District’s Engineering The Future Schools are the result of a federal grant given in 2017 for five years. Under this programme, three schools in the district were transformed into magnet schools, where anyone could apply and attend. These schools were given a theme of computer science and engineering, which is pervasive at every grade level, from elementary to high school.

This programme holds two showcases per year, in the spring and fall, respectively. However, their 2020 events were cancelled due to the COVID-19 pandemic. They decided to go virtual in 2021, and held their virtual spring showcase using vFairs. Their aim was to increase their enrollment and highlight how their computer science and engineering curriculum is helping transform education. Furthermore, they wanted to reach a wider audience so that they could attract a diverse set of parents and students.

The APS had previously held a virtual fall showcase with another vendor, but felt that they needed a more dynamic alternative. While browsing online, they came across vFairs, and found its features to be quite exciting and interactive.

When they got in touch with the team, they had some clear requirements in mind. These were as follows:

With physical events, their focus was more on increasing enrollments. However, they felt that they needed to shift this focus more towards promoting their achievements and curriculum. The end goal was the same, but their strategy changed accordingly.

The APS Engineering The Future spring showcase was held on April 19, 2021. Registration was open to the parents of current students, prospective students and parents, other schools, and the community at large. For this purpose, they chose to focus on a few key areas to help drive success:

There were around 20 booths. For the elementary school level, there was one booth for every grade. Teachers worked together to decide what to showcase on the booth panels. The middle school had too many students to showcase in the same way, so their booths represented various departments, such as Humanities and Math. At the high school level, the booths represented each subject, such as World History and Computer Science.

Pre-Recorded Videos in the Virtual Auditorium 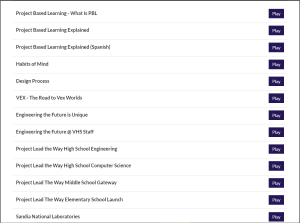 In the auditorium, the APS went for a different approach than usual. Instead of live webinars, they uploaded a number of videos which explain the Engineering The Future Programme and its various projects. The organizers felt that they needed to let the audience access content on demand rather than have restricted timings. This enabled school hours to go on as usual, while attendees could view these webinars at any time they wanted.

Apart from their own content, they also included their community partners in this showcase. These partners created videos for the auditorium, each with their own strategy. For example, Eastern New Mexico University (ENMU) chose to highlight their HSI STEM departments. On the other hand, Air Force Research Labs decided to send in a video with an experiment, while the Sandia National Laboratories sent in a marketing video highlighting what they offer. This added an interesting element to the event, and also helped the schools promote their community partners.

The organizers wanted to make all this content accessible to visitors whenever it was convenient for them, so they decided to keep the virtual event running for 30 days after it began on April 19. They felt that they could not go back to completely physical events even when things reopen completely. In fact, they plan on having virtual elements in their spring showcase for next year as well.

In the Spotlight: Group Chats

Holly from APS felt that group chats were a key feature which stood out for her. This is because they helped build excitement for the booths and webinars. Furthermore, they helped the teachers and parents interact. This excitement and enthusiasm was crucial for booth visits and potential enrollments.

‘I enjoyed the group chat, like I loved there being a place which reminded me of a conference setting, where attendees could show excitement or build excitement,’ says Holly. She also appreciated how the vFairs team supported the event so well, and got everything done as the organizers wanted. She also reiterated the extremely short amount of time the teachers and organizers had to arrange content for the event, and lauded how professional the end result was even in such a rushed way.

For the future, the team would want to explore more of the features vFairs has to offer, and plan the event with more time for the teachers to create more attractive showcases.

Furthermore, Holly found that the back-end metrics were quite incisive and found herself visiting them frequently. This way, she was able to analyze what worked for their showcase, and looked forward to using the new features we have to offer.

Holly is already looking forward to the next spring showcase with vFairs. She stated that her experience with the team was excellent and that  the staff ‘never sleeps and got the answers to all the questions they had’.