The Background: What is Harbor Wholesale?

Given the current climate, Harbor Wholesale’s needed to find a partner that could bring a dynamic trade show virtually to their customers.

The Problem: In-person Trade Shows were a Health Hazard

2020 saw a complete shift in how organizations hosted events and conferences. Gone were the days of exhibitors setting up their booths in large exhibit halls, a diverse set of attendees networking and exchanging ideas under one roof, and auditorium seats quickly filling up before a seminar.

Harbor Wholesale knew that things had to be done very differently if they wanted to contend with the following challenges:

As physical events became unsustainable, responsible organizations had to find an alternate way of arranging their events. There was just no way that Harbor Wholesale could stick to their old ways. But they still had to continue connecting their vendors with their retailers.

Perhaps they needed to find a virtual solution.

Even if they did adopt the virtual way, there were several concerns. Harbor Wholesale knew that for any event, they needed their vendors on board from the get-go.

Virtual events were a new concept for the exhibitors as well. The organizer was concern that the exhibitors might not be willing to coordinate with them virtually. Would they make an online appearance? Would they set up booths and arrange activities like speaker sessions?

3. Losing out on sales

Having retailers attend the show and engage with the vendors was an even bigger concern than the vendors themselves. Afterall, they were the ones that were driving the sales.

But now that the trade show was virtual, would retailers be interested in attending? Would they show the same level of engagement as before, and will they trust the event with their money? The company had doubts about how a virtual event could bring in the same level of sales.

Despite the concerns, Harbor Wholesale knew that they needed to take their events online. So, how did they do that while overcoming all these challenges?

The Solution: A Virtual Platform With an In-Person Atmosphere

Prior to the pandemic, a colleague from the restaurant division of the business had recommended vFairs. As virtual events were finally on the radar for Harbor Wholesale, the organization got in touch with the team.

The demonstration left Harbor Wholesale pleasantly surprised. They felt that, “It looked like a [real] show. It had all the aspects of a show and it physically looked like a show.”

The company was convinced that this was the solution for them.

The team had also evaluated several different virtual event options but found that most of them only looked like online order catalogs. They lacked the human element and couldn’t emulate in-person events. vFairs was by far the most comprehensive and realistic solution.

Harbor Wholesale recognized that vFairs had all the aspects of an in-person trade show, and the immersive environment looked like a real event. These features included an animated lobby with avatars, an exciting exhibit hall with customizable booths, a realistic auditorium with speaker sessions, and much more.

2. Making the event their own 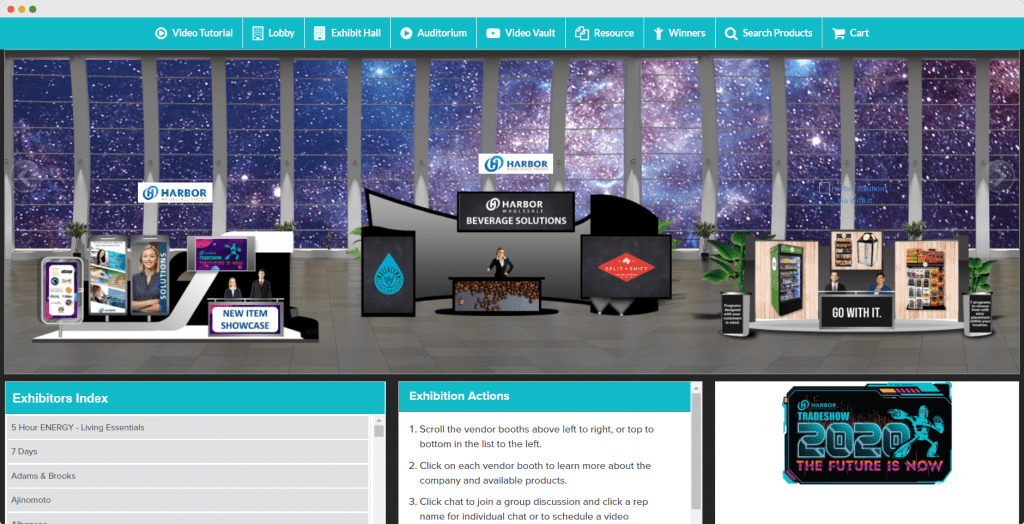 Harbor Wholesale’s theme for the event was “The Future is Now”. While they loved the futuristic look of the platform, they were excited to learn about all the customizations it offered.

The company was able to completely customize the look of their event, changing the layout, setting up the lobby area, and personalizing the halls. Even the exhibitors had the freedom to brand their booths and design them as per their liking.

As engagement had been one of the main challenges for the organizer, they found that the chat and Q&A features enabled their attendees to easily engage with the exhibitors to make up for the lack of in-person interaction.

Harbor Wholesale also used cash prizes to incentivize attendance and activity. They gave out a $100 cash prize every hour to one lucky online user to keep their audience hooked, thereby boosting engagement.  They also gave away prizes from vendors based on bundled purchases.

The reporting feature enabled Harbor Wholesale to closely monitor how their first foray into virtual events fared. In this way, they could compare this event’s numbers with their in-person events and identify whether this virtual experiment had worked out for them.

They could also look into in-depth KPIs, understanding how stakeholders interacted with their event and what could be improved in the future.

The company found the dashboard to be extremely simple to use. They could export data in real time to tell what their sales were like at any given moment and also at the end of the event. Harbor Wholesale found most other virtual platforms lacking in this regard, with reporting being extremely cumbersome.

While Harbor Wholesale were bracing themselves for slashed profits with virtual events, they saw a 35% increase in sales with vFairs compared to their most recent in-person trade show. Their virtual event also saw a surge in new customers and the exhibitors loved it.

For Harbor Wholesale, taking that leap of faith and opting for a virtual event with vFairs paid off! Dan Willows gave the solution a 9 on a scale 10 and said that the solution was “really world-class”. The company is all set to recreate the same magic with vFairs again in 2021.

Thinking of hosting a virtual event?